AIDS(Acquired Immune Deficiency Syndrome) is a syndrome resulting from the HIV virus. It is when a person’s immune system is too weak to fight off many infections, and develops when the HIV infection is very advanced.

This is the last stage of HIV infection where the body can no longer defend itself and may develop various diseases, infections and if left untreated, causes death.

There is currently no cure for HIV or AIDS. However, with the right treatment and support, people can live long and healthy lives with HIV. To do this, it is especially important to take treatment correctly and deal with any possible side-effects.

HIV is a virus that gradually attacks the immune system, which is our body’s natural defense against illness. If a person becomes infected with HIV, they will find it harder to fight off infections and diseases. The virus destroys a type of white blood cell called a T-helper cell and makes copies of it-self inside them. T-helper cells are also called  CD4 cells.

Innate defenses at first stop HIV and it cannot penetrate from unbroken skin. HIV is transmitted via direct exchange of body fluids. Sexual intercourse is the most common mode of transmission. Blood to blood contact, such as through sharing needles for intravenous injection or blood transfusion can also transmit HIV.

HIV transmitted through sexual activity enters the bloodstream via mucous membranes lining the vagina, rectum and mouth. Macrophages and dendritic cells on the surface of mucous membranes bind virus and shuttle it into the lymph nodes, which contain high concentrations of helper T cells (CD4+ T cells). 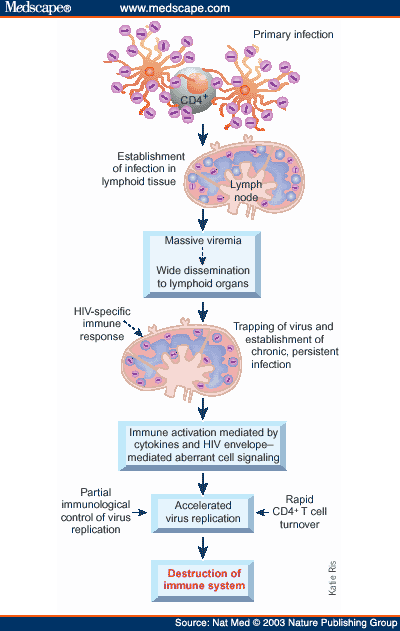 Once HIV has entered the body, the immune system initiates anti-HIV antibody and cytotoxic T cell production. However, it can take one to six months for an individual exposed to HIV to produce measurable quantities of antibody. The immune response is weakened as memory T cells (CD4+ CCR5+) are destroyed.

Transfer of virus to lymphoid tissues:

HIV enters the body and binds to dendritic cells (orange cells with projections) which carry the virus to CD4+ T cells in lymphoid tissue establishing the infection.

Viremia and Dissemination of virus:

Virus replication accelerates producing massive  viremia and wide dissemination of virus throughout the body’s lymphoid tissues. An immune response against virus causes some protection but a chronic persistent infection is possible to occur.

The production of cytokines and cell divisions that regulate the immune response for protection also cause HIV replication. There is a rapid turnover of CD4+ T cells that ultimately leads to their destruction and to a change in lymphoid tissues that prevent immune responses.

Bitcoin, Rare And Gold Coins—Which Investment For You?

In gardens, space is always a premium, especially in urban areas, as a result of human institutions, which has a

PPL has collaborated with University of Engineering and Technology, Lahore (UET-L) and three other universities in Punjab and Khyber Pakhtunkhwa

Another Primary Webb Space Telescope Instrument Gets the “Go for Science”

Auroras Incoming? Giant Sunspot Has Doubled in Size and Is Pointed Right at Earth